The first of the Istari and definitely the..well…least renowned (unless we’re counting blues), but he does have some massive tricks up his sleeve. Not only an epic sleigh, pulled by Rhosgobel rabbits no less, but also one of the legendary great eagles.

It was a daunting task but the variety of models and base sizes meant some interesting opportunities.

The bases alone where an enjoyable, if sticky, affair. I wanted to continue the Dol Guldur theme, my White Council battling the forces of the Necromancer through the ruins. For the on foot model this meant a fairly simple stepped base, Radagast leaping into the fray, but for the sleigh and eagle I could get a bit more creative.

The sleigh already had a fantastic leaping pose, so rolling with that I created a chasm for them to leap over. This was achieved by positioning the model with blue tac and pencilling in the contact points, as well as a channel for the chasm. Then when I started building the base I could build around these guidelines.

I was free to create anything for the eagles base, just needing a contact point for the flight stand itself. I tried to create something more indicative of Dol Guldur than I had before. I’ll leave it up to you to decide if I pulled it off or not.

Overall I had a blast painting these. The variety of creatures was fun to tackle. I was going to complain about the amount of brown, but that’s definitely something I was forewarned about.

Take a look at the White Council so far…

That just leaves me with 3 members left; Gandalf, Elrond and Saruman. I’m still not sure which one takes my fancy the most.

The time has finally come for paint to meet elf!

These have been awaiting paint for a while and, like the Inhumans, I found my inspiration and got stuck in!

Galadriel leads the White Council so I felt she was a suitable place to start the painting. It’s also a fairly simple sculpt and felt really small after some of the other miniatures I’ve done recently.

I’m theming the models around Dol Guldur, so I wanted to push the creepy feel on the bases but also on Galadriel herself. This is why I chose the colours for the robes, White to off green.

Celeborn felt like a natural follow on. I chose the colours to link him to Lothlorien, golden armour, and to Galadriel, the robes. I also added some floating leaves to both bases using thin wire and miniature leaves. I hope it comes across as the leaves in the wind I was trying to portray.

Last but definitely not least is Glorfindal. I wanted to keep up the spooky theme and keep this chap fairly sombre. He has died before after all. It’s a fairly monotone mini, with only the sword and the hair to really add some colour, but not a lot of warmth.

I’m really pleased with the end result, especially with the way it helps the blade stand out.

The last of the elves or the first of the wizards? Still not sure what I’ll work on next…

Had a blast stepping back into Underworlds to paint the amazing Ylthari’s Guardians.

It might only be 4 models but boy are they characterful. Par for the course with the underworld range, it still surprises me how individual each model feels whilst still being strongly cohesive with the rest of the team. I really want to paint some more! For now take a look at the models below…

A commission I was working on last year for a host of characters, beginning with some of Rohans finest.

First up is the new Eowyn & Merry set. Games Workshop is knocking it out the park with thier plastic characters and these are no exception. The detail and dynamism is phenomenal.

Deorwine and Elfhelm are again some phenomenal models. Elfhelm in particular has a fantastic pose, the momentum carried through him and his horse, with the throw poised to release. Really one of my alltime favourite models.

Finally we have the bearer of the royal standard, Gamling. This is an old school metal miniature and it does show. Whilst i enjoyed this figure for the most part the banner was hell. It’s really hard to paint patterns in such a wavy area and sometimes the texture of the metal can be a little funny. I just hope that it still looks suitably impressive.

Starting off with Craftworlds I knew I wanted some rangers. I was put off by the single sculpt squad, especially since its only available in finecast, so needed to work out an alternative that would fit my idea of rangers better. I’ve always felt that Rangers should be a bit more exodite like, with a more exotic and less uniform look.

What I came up with came from a combination of Shadow Warriors from the AoS range, Guardians and some Drukhari weapons… 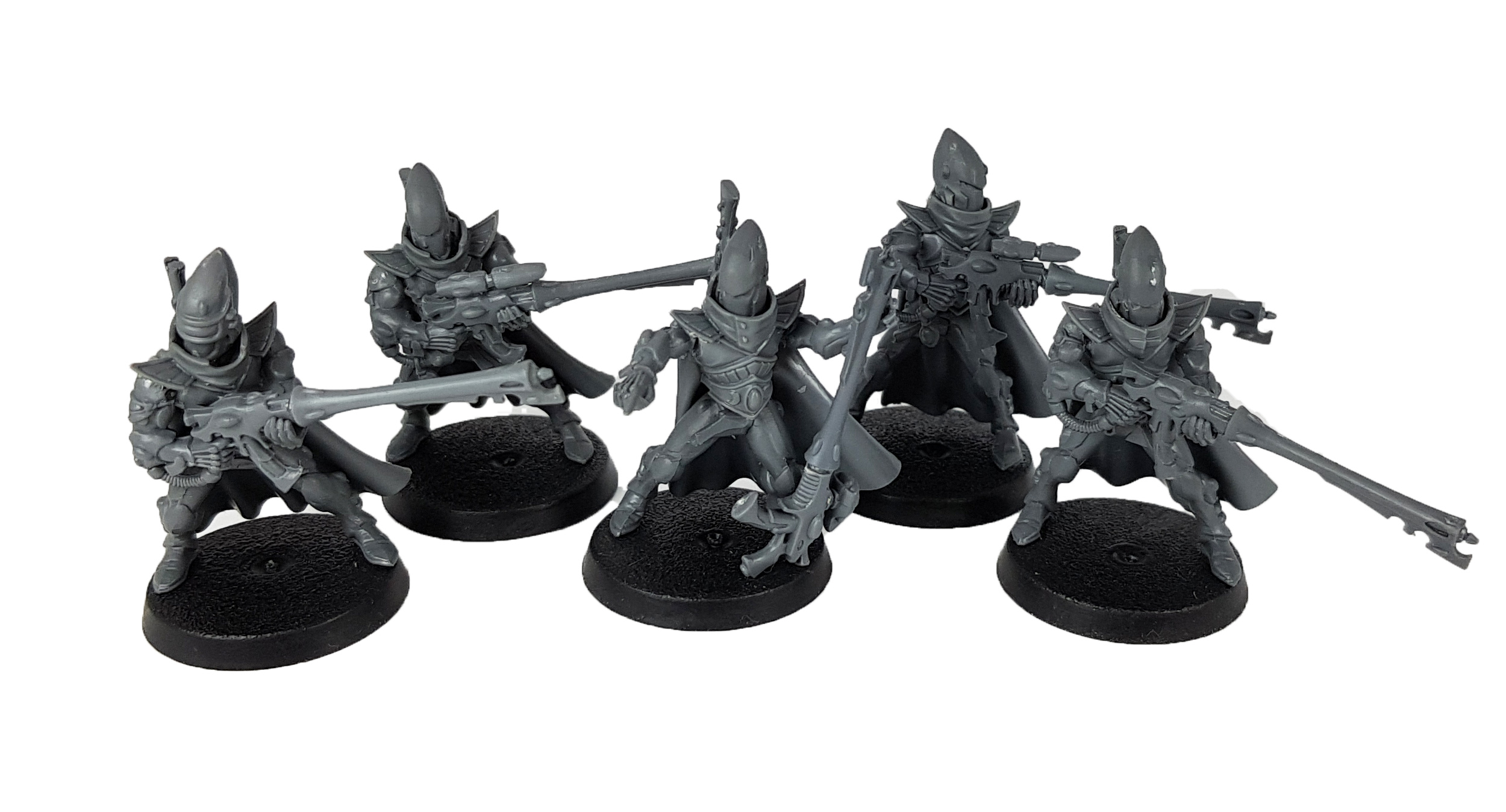 As you can see I used the guardian legs, arms, heads and Shuriken base, the Shadow Warrior torso and Dark Lance barrels.

The other five worked with the same base combo but I used unhelmeted heads and Heat Lance barrels.

I plan on working on some more using something other than the Shadow Warriors, likely the Wildwood Rangers and yet more different gun barrels.

Having recently got back into playing 40k, I started work on the first part of my army, Murder Clowns! Harlequins were never a fully fledged faction when I was last playing, and that new shiny factor plus the painting opportunities sealed the deal.

I’ve been working on converting up a selection of characters, starting with a couple of Troupe Masters…

This will be my Grand Avatar, likely armed with the Storied Sword from now on. I used the Nomad Prince from the AoS range, with a few parts from a Troupe box, the torso, head, feet and blade.

Another AoS model, this time an Assassin. This was built to be a Troupe Master with the Starmist Raiment. I’ve tried to create a diamond effect on the cloak similar to the Solitaire.

I’m also working on a Shadowseer and peeking into the realm of Craftworlds. Always wanted as Wraith army…

I’ve been working on and off on these guys for a while now and it was finally time to pull everything together and add the final touches.

I’m happy with the result, especially the purple and the bases, a great way to tie everything together, that was requested by the client. 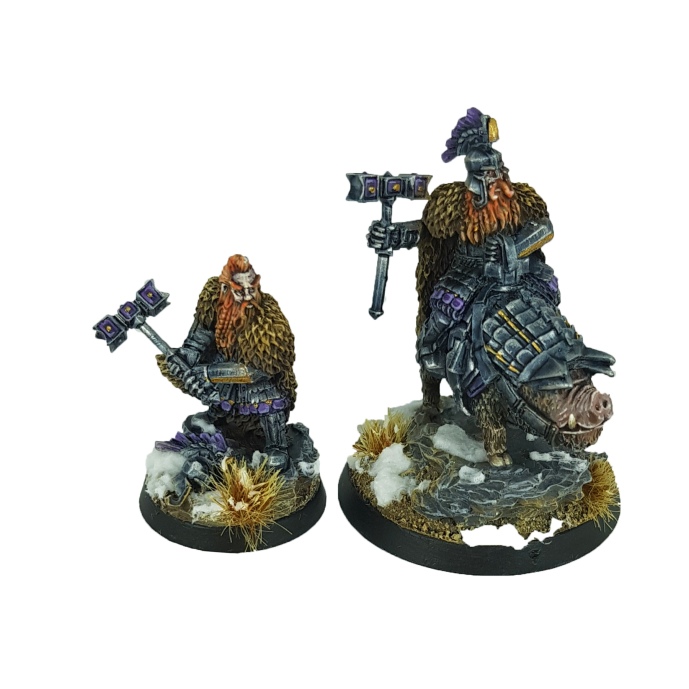 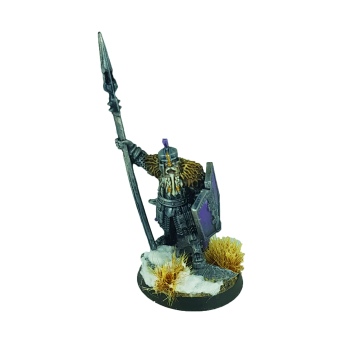 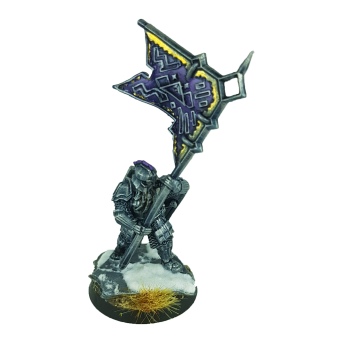 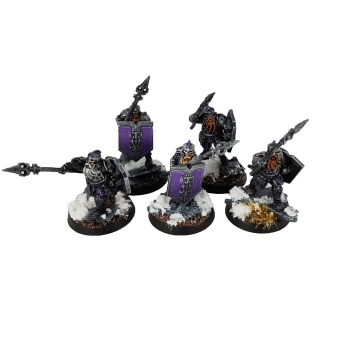 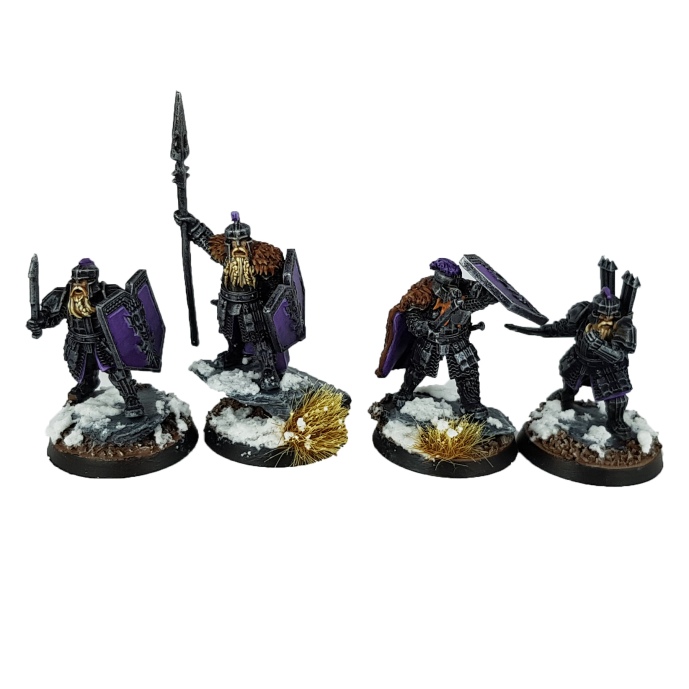 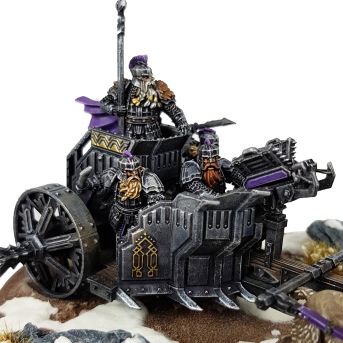 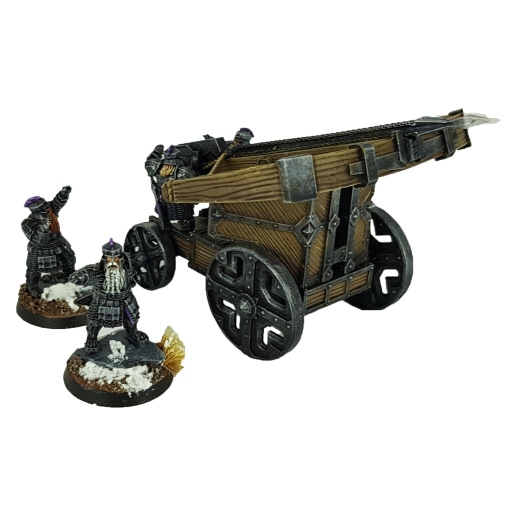 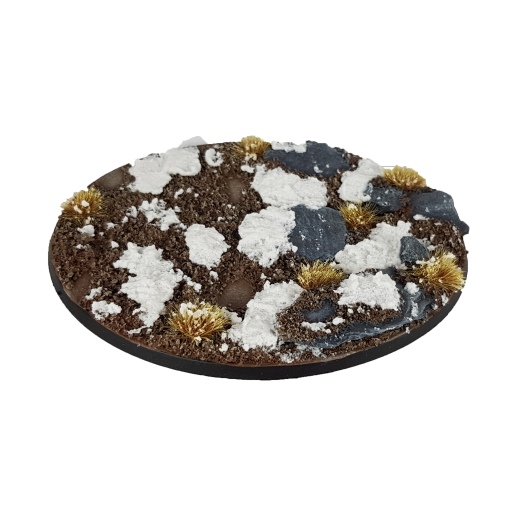 If you’re looking to get you’re army painted, pop me an email at deathwatchstudios@gmail.com

No it’s not a Britney Spears themed gang, but it is yet another one! How did this happen? I wasn’t planning an Escher force! Damn models just lying about waiting to be built!

Inspiration struck again and I couldn’t stop building until they were finished, and as such the Hive Angels were born…

This lovely leader will serve as my Leader, the Prophet of the Angels, she who preaches the true path.

I’m counting the Drukhari blade as duel stiletto swords and still need to figure out a way to model a shotgun on there.

She’ll be backed up by her champions, the icon bearer…

Then there are all these lovely ladies to help out…

As you can see I’ve gone heavy on the wych weapons. I have a hefty amount of Druhkari bits, and I really love all thier weapons. It also fits the aesthetic I was going for perfectly.

The wings are from a few different sources, but mainly the aquilla icons from the Imperial vehicle upgrade sprue.

I’m going to pop these to the side for a bit though, lots of projects to be working on and nothing left lying about to build!

Things took a bit of a turn with my Necromunda projects. The Van Saar hangers-on are under coated and ready for paint, I even got a couple of bounty hunters prepped. But then the Underhive box arrived.

I ordered it mainly for the Zone Mortalis tiles, for playing this version of the game but also to use for backdrops for some photos. I was going to sell the rest off to recoup a bit, but a seed had been planted. ‘Why not just build a new gang? It will be good to have two.’ Said that voice in my head. All it took was a quick look at their options to cement the idea…and thus the Vatforged were born…

This is Arn, the leader, and his pet croc, alongside his twin brother Vito.

Both birthed from the same gene-vat, they were born into the Goliath way of life. Arn took to it like a fish to water, rising swiftly. Vito struggled to begin but with the help of his brother, he has fought a hard and bloody path to earn his place.

Still a bit of green stuff work to do on these to polish them off but what you see here is pretty much how they’ll look.

Next up is the rest of the gangers…

I went for a bit of a mix with these and still want to add a bit more, especially the tank tread armour as I’m especially pleased with how that looks. I’m thinking of continuing that theme to Arn, and replacing the crotch chains with treads.

But then that voice spoke up again, ‘Why not do an Escher gang as well?’. Well, I might as well…

I’ve been busy with a lot of other projects and dealing with some health issues but I’ve still managed to find a little time here and there to add some more fighters to my Van Saar gang.

I’ve added another champion, with combi-plas, shield and power stave. A powerful shooter but someone who can also deal with threats up close.

I’ve also added to the ganger count with 4 new bodies. 1 Lasgunner, 2 Las-carbines and a Suppression laser. This alongside my other couple of gangers gives me a good solid base for any other additions I want to make.

Next up for painting though, it’s going to be the hangers-on. These are likely to be very different from the Van Saar, so should be an interesting change of pace.