55 models this month! Trippling the total so far.

I’ve been in deep with the painting this month working on a lot of commissions but also finding the time for a few of my own wee projects along the way. It’s also a month were I have tackled a variety of ranges, Harry Potter from Knight Models, Guild Ball from Steamforged, a Beholder from Wizkids and Necromunda as well as Lord of the Rings from Games Workshop.

This gives me a stiff target for next month, but I do have a job coming up that will help tremendously.

On through another month and this time my painting total is looking a little healthier, but has a major difference between any of the months previous. It’s mostly terrain. My main work was the Mantic terrain crate and this one is difficult to stack onto my model count, so I’ll be starting a new scenery count as well.

With the drop of the new Armies of the Hobbit book, it’s time to get the Witch King and the spectral Castellans onto the table!

I used the Witch King on Fellbeast flaming sword arm to add that wee bit of extra flair to him. The plan is to paint this up as spectral blue fire, something I will likely carry over to the other wraiths and the Castellans… 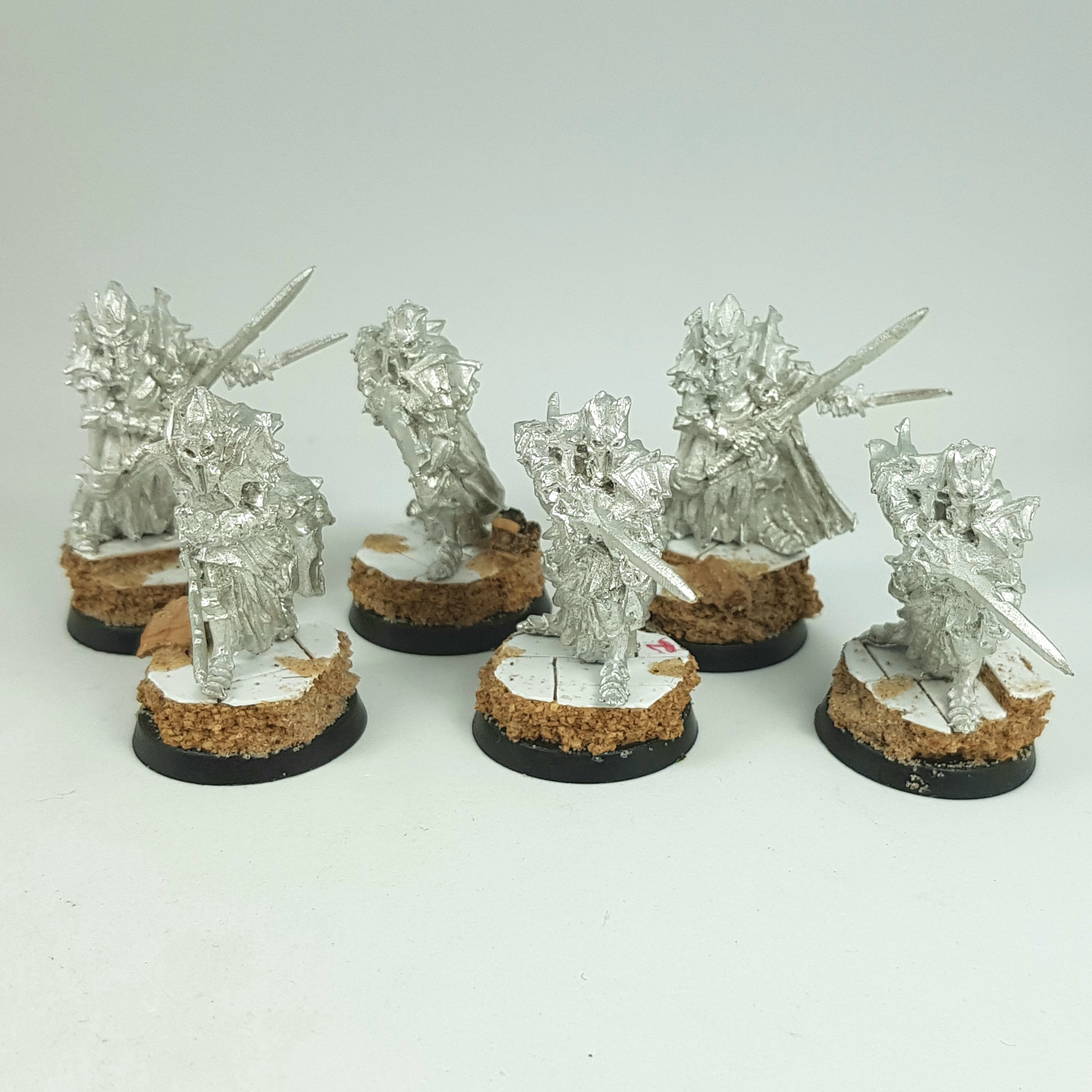 A fairly expensive reinforcement, and with a limit to their fighting time, these horrific spirits also offer a massive level of survivability, as they can use their Will as Fate.  Also, Morgul Blades for 5 points? Yes please!

November began with the first few models of my White Council force, Gandalf and Elrond. I really enjoyed cracking into these as it was my first real attempt at a textured highlight. It was also the first time I really felt like I’d acheived the effect I wanted with the swords, and I’m really proud of the result on both.

The only new addition to the Azog’s Legion were the Mirkwood Spiders. A fun addition and something i’ve been loving using in games.

And last but not least I painted up 8 figures for a painting guide in this months issue of Tabletop Gaming Magazine. 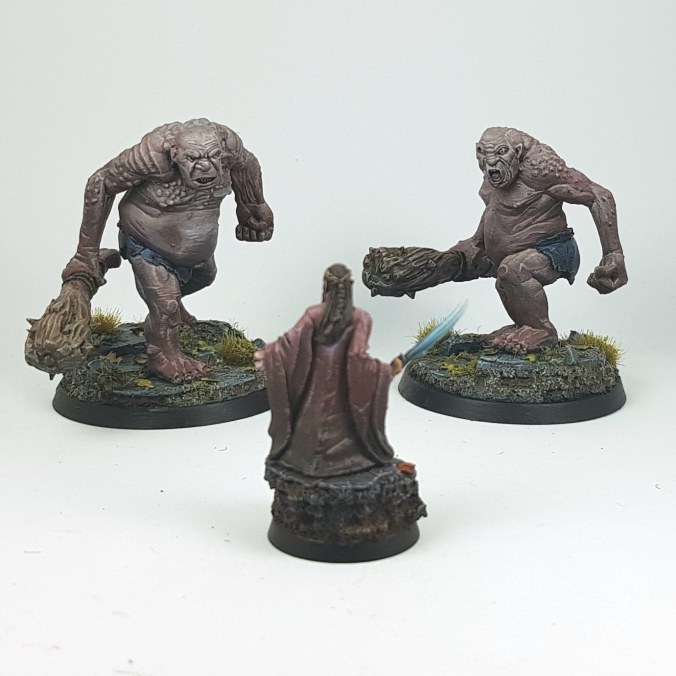 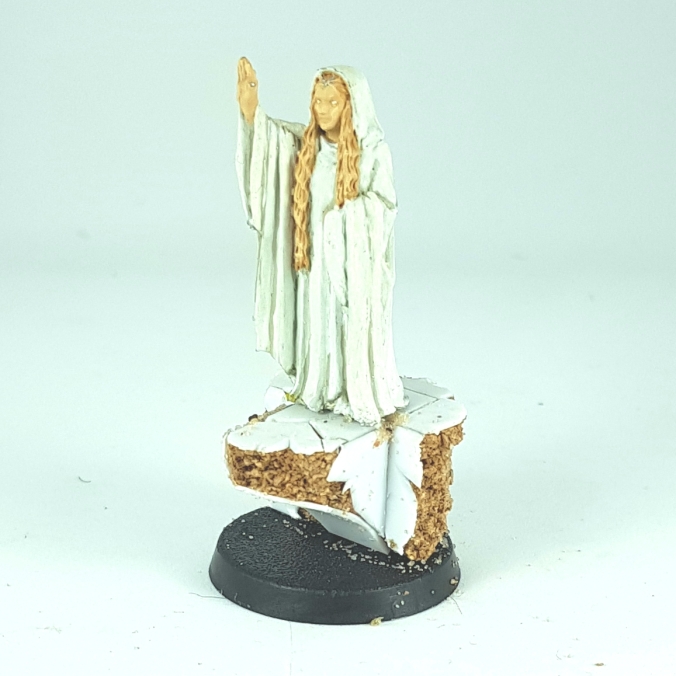 The first of which is the Lady Galadriel herself. Mustering up a respectable profile, she provides a great deal of support. Helping to stop incoming shots as well as offering some help with resisting magic for those needing to get stuck in.

She seems like an easy paint, but I want to keep her fairly dark using her hand as the light source of the model. 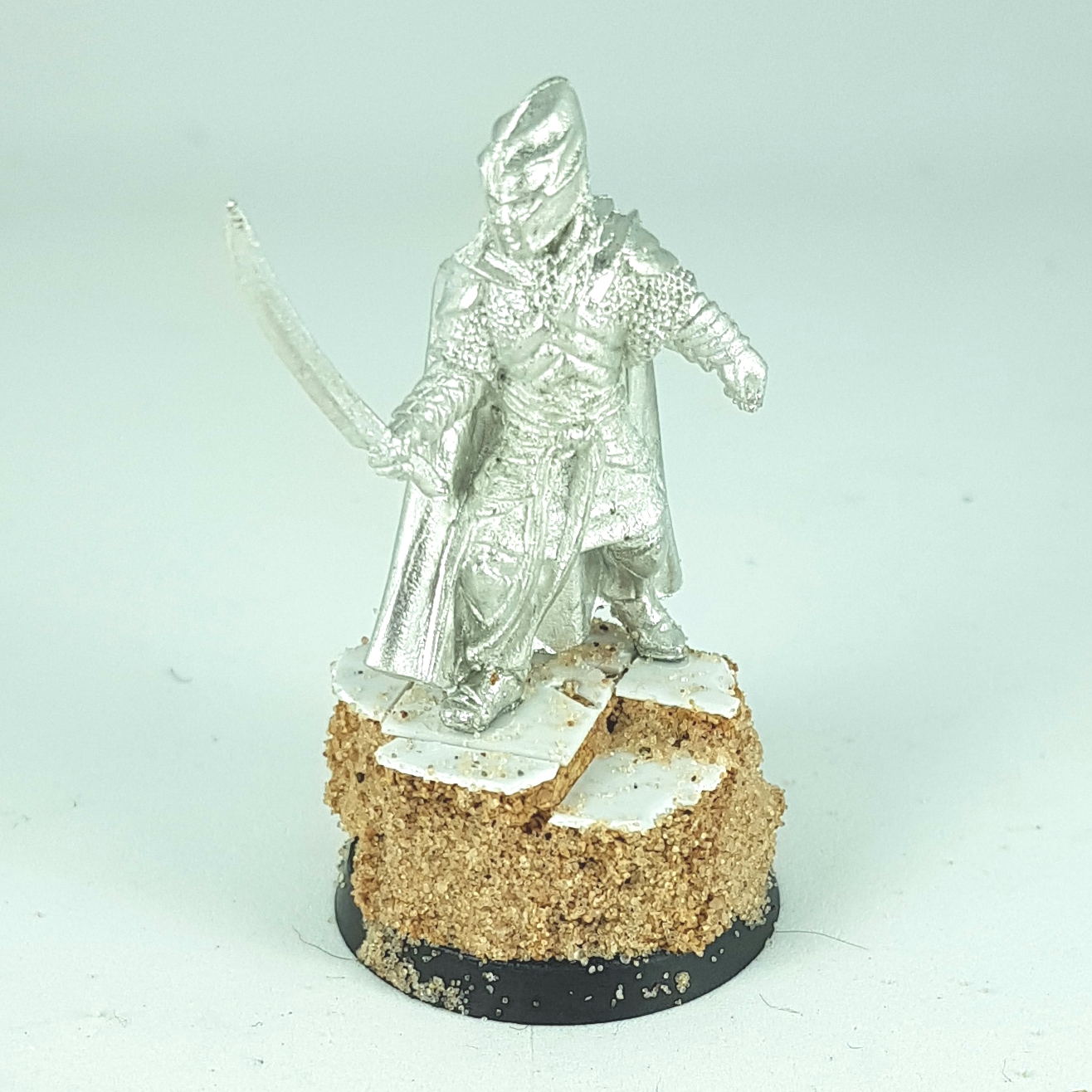 Following on from such a powerful sorcerer, is the second Lord of the West to make it into the list, Glorfindal. A combat beast, with impressive defences to match, he’ll make mincemeat of the opposition.

This one’s going to be a lot of fun to paint. It will be my very first time tackling that beautiful elvin armour.

That’s the reinforcements for now, just awaiting availability on a certain brown wizard and to find the right model for a certain white. Once they’re in there I’ll have the White Council properly ready for battle!

I want to look into expanding my Azog’s Legion army by the way of allies. With ‘Master of Battle’ being such a strong addition to Azog I knew I needed to look at green allies. That kind of thematic link being something I look for in a force anyway. That meant Azog’s Hunters or the Dark Powers of Dol Guldur.

If you’ve been reading my recent Middle Earth SBG posts you’ll know I have a history with Dol Guldur and it didn’t take me long to look in their direction, especially with those tasty Nazgul models. This was my nine from around 8 years ago, no longer with me unfortunately…

So the first port of call was a few of the Nine to start them off. After looking through the profiles and what came in each pack I settled on this lot…

The Slayer of Men was on the radar straight away. +1 to wound is always a great boon, especially on someone I wanted leading some troops. The Dark Headsman made the cut partly because of the awesome sculpt, but a nice special rule for that chance of killing a juicy target helped too. With the Witch King coming along too, I was sold. +1 Might is another no brainer over some of the other rules the Nine offer and for the captain like purpose I would like to use them for.

You’ll notice the Witchking is missing his sword, just awaiting a peice so I can do a small conversion on him.

With some ‘captains’ to lead some Dol Guldur warbands I also wanted some unique units to go with them. Whilst I could easily throw in some Gundabad Orcs, an advantage that makes this list a natural ally, I wanted something I couldn’t get anywhere else. This inevitabally led me down a nostalgia path once again…

That’s right, Spiders. Alongside my Necromancer force I used to collect a force of giant spiders led by the Spiderqueen. I said I didn’t want to repeat my past armies, but here we are.

These should give me a nice wee boost in choices and offer some different tactical options. I’ll take a look at that once I’ve had a few games with them.

Nxt up will be some more reinforcements for Azog’s Legion, not allies, but some of the big guys!

I’ve got my first 800pts finished and painted up and I’ve really been enjoying the games I’ve been having with them, especially the variety of units I can get on the table. I wanted to offer a look at what I’ve discovered about them.

Overall I’ve found the army very good but also fairly well balanced. So far nothing seems overcosted nor undercosted, although I know there is a debate about whether the ‘Master of Battle’ bonus should be on a 4+.

I also found that they never really felt outclassed, well except by Sauron, always able to meet challenges with at least one part of the force. This flexibility is what I love most about the force. Azog’s Legion is really a jack of all trades, but master of none. 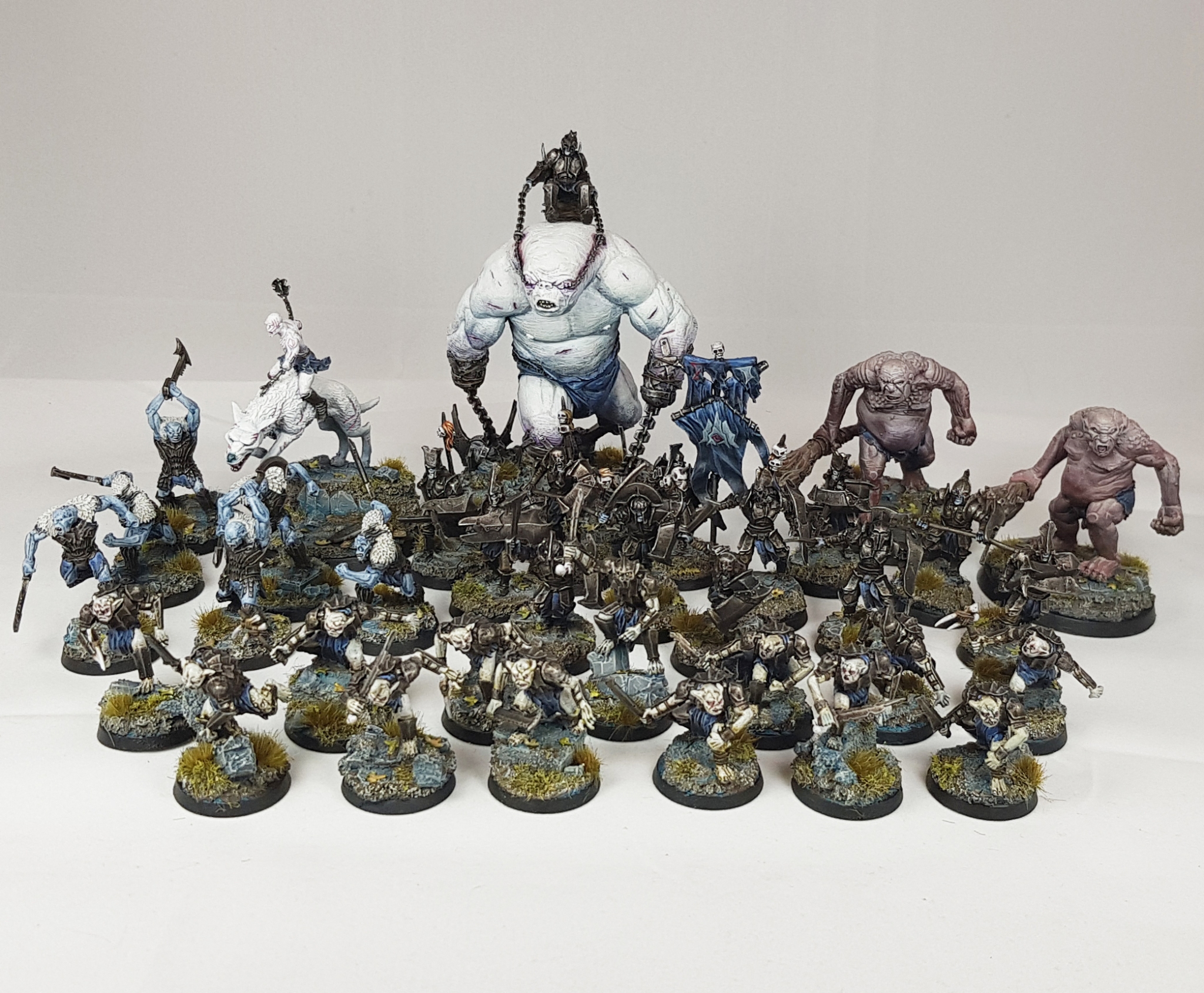 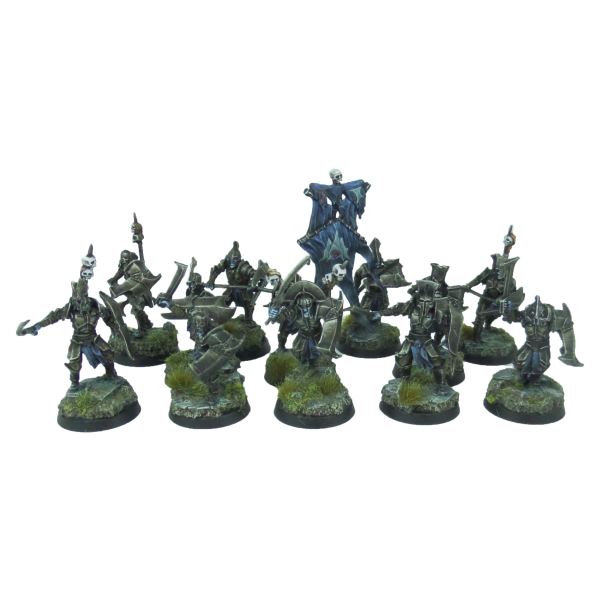 The Gundabad orcs offer a solid backbone to your army. An average statline but a good defence brings them in line with most other armies ‘better than usual’ troops.

They won’t wow you on the table top but they’ll certainly do their part. 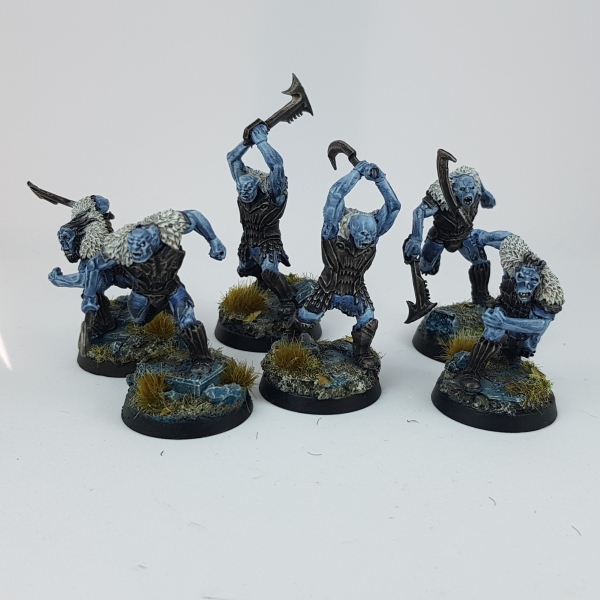 Solid linebreakers, but I think they really excel at flanking and outmaneuvering. Some middling stats stop them from being outstanding but this is reflected well in their cost and rules. 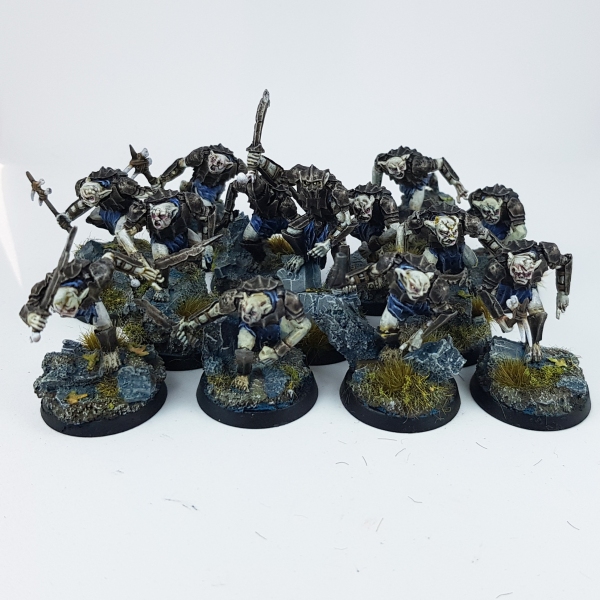 Offering a nice tactical choice with their ‘Mercenary Ambush’ special rule, which allows them to show up within a terrain peice from turn 2 onwards they do however feel a little expensive. The captain racks up at the same points as the Gundabad orcs equivalent meaning paying for the ability even if you don’t use it. Still a nice cheap addition to an army and you do get a lot of joy when they manage to kill things. 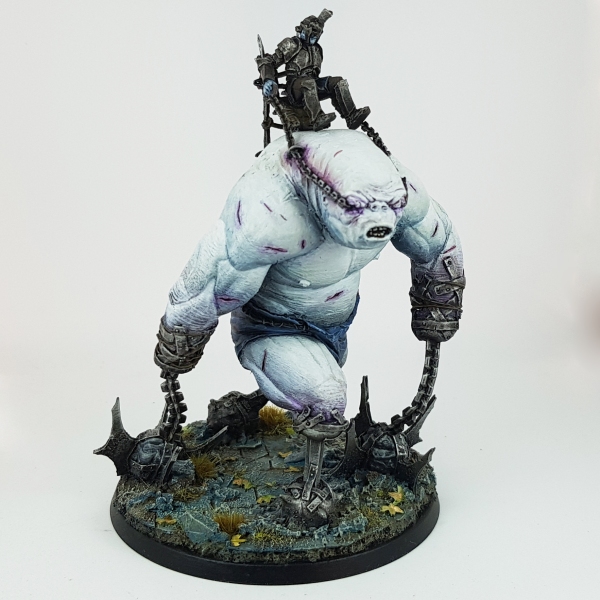 I love this guy. The brute causes a s10 hit on every model it touches during movement. If the model dies he can keep moving. And squashing. That is until he fails to wound and charges the survivor.

The first few games I failed miserably, forever rolling 1s and 2s and squishing nothing, but once he gets rolling he can make a mess of enemy lines. Just watch out for wizards. Compel and Command cast on him at the wrong time can have him walking over your own force! 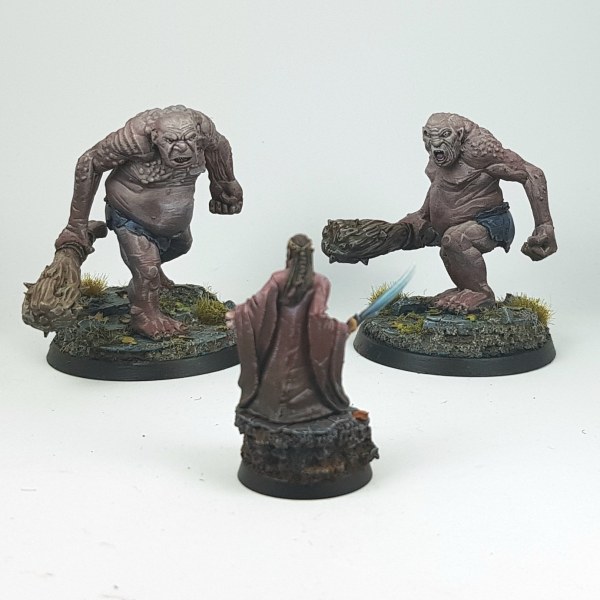 The ogres are a weird addition to the force, offering a brutal but easily overwhelmed linebreaker. Much like the Beserkers they have an 8″ move, making them unusually speedy. The ‘Relentless Advance’ rule adds even more flexability. They can charge through thier own troops, orcs, goblins and warbats. Theres a good chance it will kill them, but getting the ogre into a key combat can be worth it.

Backed up by some solid stats and a relatively cheap cost I would highly recommend adding them into your force. 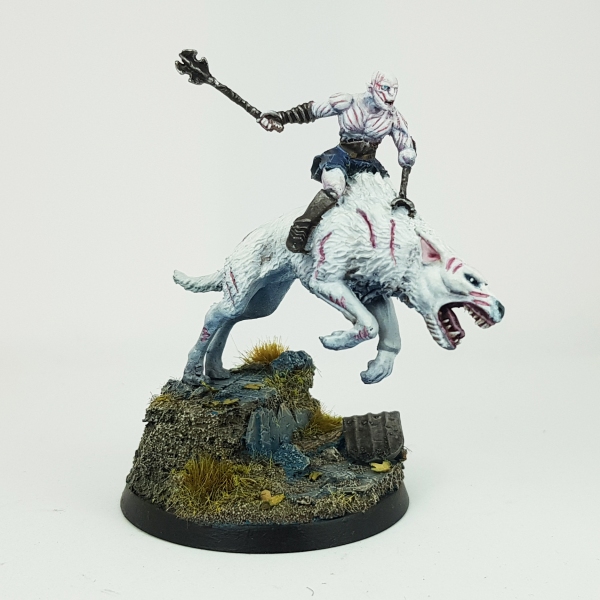 Azog is a beast, an absolute beast! He has an outstanding stat line, alongside some brutal special rules meaning he is quite easily one of the best combat based characters in the game. On the White Warg he is a force to be reckoned with. Being able to share their store of Might, Will and Fate they have access to an impressive 6, 4 and 2. This combined with the army special rule, giving Azog ‘Master of Battle’, tools him up to deal with a good amount of the major threats coming your way.

Whilst he’s impressive wielded as a hammer, smashing aside rank and file, I reckon he should be your scalpel. Direct him towards any mid level character and he will end them in short order. Even some of the more prominent characters will fear Azog charging down on them if he has a good amount of Might left.

I should also point out I haven’t used the flail yet so haven’t factored that in.

The only ones that I haven’t played with as yet. The war bats and the catapult because there are no models yet and I’d rather wait for official ones. The trolls and Bolg because I haven’t picked them up…..yet.

And that’s my thoughts so far on Azog’s Legion, but I will be looking to get reinforcements as well as some allies in the very near future. More on that soon. In the meantime let me know what you think and if I missed anything.

All of my guides and articles will continue to be free and open for use by anyone, but if you did find this guide helpful please support me with a donation, so I can continue to make great tutorials like this one!