15 years ago I was sucked into the hobby vortex from whence I have yet to return. 15 years ago a friend urged me to have a game with his brand new The Two Towers boxed game. 15 years ago that I started my journey leading to where I am now! 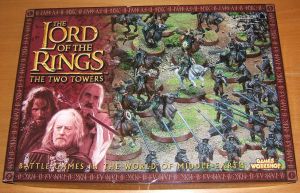 Following that game with a friend was a frenzy of collecting, hobbying and battling. The release fo the films alongside a massive influx of related materials just spurred me further into a love of the universe. The Lord of the Rings SBG gave me a creative outlet to focus this sudden interest and I dove right in. Converting my own characters, creating scenery and even building a massive cardboard Osgiliath in my living room. It eventually led to a job in Games Workshop and the other games, Warhammer and 40k. From there, as you can imagine, I fell right down the rabbit hole and have never looked back. I owe a lot to Lord of the Rings, the one game that started it all!

I continued to play Lord of the Rings for many years, but slowly started to drift away. Tyranids and Hordes of Chaos Warriors began to draw my attention. Not to mention the slowing releases and lessening excitement surrounding Lord of the Rings SBG. I spread my hobby seed far and wide, sampling a whole slew of games, never really finding one to settle on and in the last few years I’ve not really had any game were I could get my hobby fix. Playing games like X-wing that come pre painted and built led to a bit of a slump in my own hobby activity and enjoyment of the games I was playing. I hadn’t even realised it was the hobby itch that needed scratched.

It wasn’t until an old friend started to get excited about the imminent release of The Battle of the Pelennor Fields box set that I even thought about what I thought was a defunct game. I hadn’t been following the game at all so was totally ignorant of the Hobbit releases, Forge World getting involved, nor of a new edition being launched. I wasn’t even aware that there was still a very active scene surrounding the game, but I still wasn’t sold. My love for the universe had faded with the buzz of the films and I wasn’t sure I could get into painting units I wasn’t keen on or had tackled plenty of times in the past.

That is until we all had a wee refresher game. As soon as the action started rules came flooding back. It was a half hour of gaming that started with me being as disinterested as they come and ending absolutely psyched for the game again.

I immediately began researching what was now available and what army I would be collecting. This opened up a whole host of possibilities that I had not seen until now. The Hobbit releases in particular caught my eye, as I was a big fan of a lot of the design elements in the films, particularly the monsters. I love some gribblies. This was it, this was when I knew that this was the game for me. It was a joy to feel so passionate again about the game that started it all, and from what I’ve experienced about it so far I know I’ll be playing for a while.

Come back soon as I’ll be taking a look at the armies I chose and why.