Started to get stuck into my first Xtreme team, and I thought I would start off with the Kalyshi becuase I liked the models the most. That turned out to be incorrect, but before I open that can of worms let’s take a look at the team… 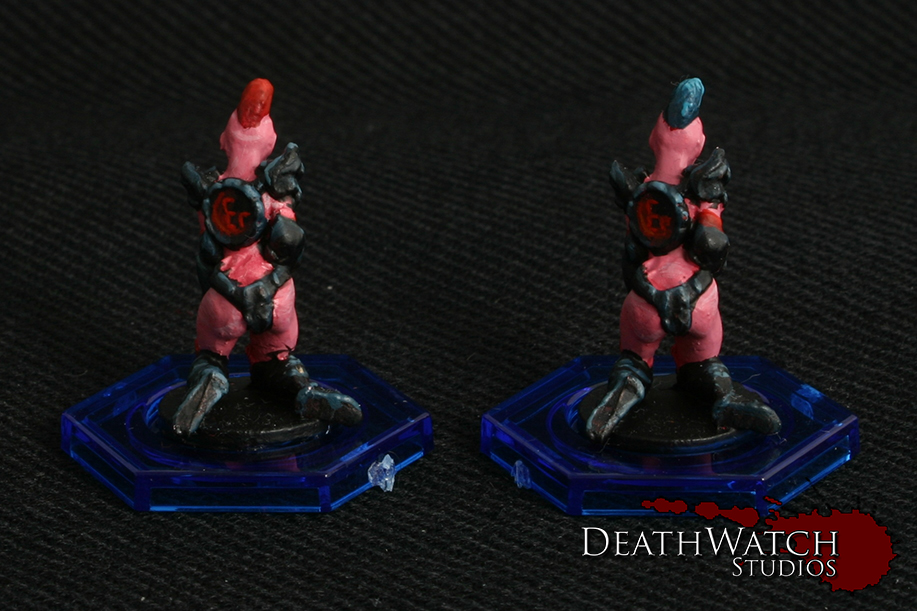 That’s the main eight players and the two prone markers done. I was planning on doing maybe a couple of more to give a bit more flexibility but wanted to stick to what’s out the box at the moment, and I’m glad I did. I found it really hard going to clean and paint these. The mold lines on these models, whilst not numerous, are in some of the most horrible places. Some such mold lines where down their neck and chest, which is a really obvious place, that is really hard to get the right angle to clean. Further to this the models lack a lot of definition leaving a lot of the details looking flat or a bit messy and ambiguous as to what is what.

I decided to do something different with the paint scheme and, inspired by Guardians of the Galaxy’s Krylorians, decided to go for a pink skin with a dark armour.

Overall I was unhappy with the models and in the end know they are not my best work as a result.

In addition to the team I also painted up their sponsor, Blaine…

In contrast to the Kalyshi, Blaine is awesome. He had little to no mold lines and the definition was great. So Blaine was a lot more fun to paint, and very rewarding after the time I had with the Kalyshi.

I do plan on painting up the Kalyshi MVP, Kailasa, some time in the future in the same scheme for two reasons. To be used as the MVP but also to be used as a guard so I can use this team as a standard Dreadball Asterian team.